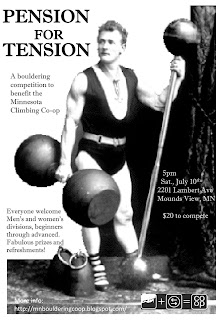 Come support the Co-op...
Click on the burly image for more info!

At the last board meeting, we narrowed the list of names down for the gym. The name of our gym is important for several reasons...it's what you call it when you're telling someone else about how cool it is to climb there...it becomes slang and interchangeable with the Co-Op...and it looks damn good on a t-shirt!

So take a look, here's our top 10, in no particualar order. Pretty soon there's gonna be a way that you can vote for your top three here. Then the board will verify all the legal crap and you will be able to tell all your friends to climb there. Check back soon...

What's in a name?

We are looking for a name for the new gym, and decided to open this up to the public. It seems to fit with the spirit of the co-op!
We will narrow the list of names down at the next board meeting (June 15th), and then it will be put to a vote. If you don't want to publicly offer up your suggestion for a name, you may email send it in an email here: mnboulderingcoop-board@googlegroups.com
Some ideas so far are:
Posted by Unknown at 11:45 AM 5 comments:

Our first board meeting

Tuesday, May 18th, 2010, the newly elected board of directors got together to bring us one step closer to the formation of our climbing co-op. All 7 members of the board were present, and we recorded the meeting for future reference.

Our first order of business was to officially vote in Matt Hainley as Membership Officer as he was unable to attend the campfire meeting the Saturday before, but he had phoned in his request for the position. Congratulations Matt!

Lynn had some T-Shirts made up that say "Climbing + Sharing = Co-Op", and they would be ready before "The Core" movie preview on Thursday at the Riverview Theatre. Thanks Lynn! The plan is to have everyone on the board wearing the T-Shirts so that when Glen makes an announcement about the Co-Op he can let people know to ask one of the people wearing a "Climbing + Sharing = Co-op" t-shirt about the co-op.

We decided to meet bi-weekly until the gym is up and running. We will start with every other Tuesday at 7:30 PM until further notice.

We made some adjustments to the duties of the various membership roles to more evenly distribute the tasks. Details of these duties can be provided if you are interested. Just send us an email.

Insurance costs were discussed, but we still have quite a bit of phoning around to find an accurate estimate.

Our timeline for having the co-op up and running is January 1st, 2011.

Kris wanted to remind people that if they have any questions or need help with wall issues, just let him know.

We elected Liz Horn as our official Fund Raising Director, and it was decided that we would like Micah to be present at the meetings if he would be so inclined as he has been very helpful thus far.

Some possible start-up fund raising ideas were passed around, but nothing specific was decided upon yet.

At the open meeting held at Lynn and Kris' house March 15th, it was decided that the best course of action to get the co-op up and running was to form a board. A board of 7 members would be chosen, each of which would be delegated specific tasks, would meet on occasion to keep everyone else informed, vote on topics and keep the process rolling.

7 members was decided to ensure there would be no ties when voting occurs. It was also decided that at least five members must be present for a vote to occur.

This board will streamline the process of forming the Co-op to help us get up and running faster. When the co-op is officially formed and the gym is opened elections will be held to decide who will be on the board who will make guiding decisions for the operations of the bouldering co-op. This makes the current board, the “Association for the Formation of a Rock Climbing Board”. Catchy, huh?

The 7 members chosen on the 15th were:

If you have any questions or concerns you wish to send to the board, you can contact the board by sending an email to: mn bouldering coop dash board at google groups dot com.

We will do our best to post meeting notes on this blog to keep you informed. Stay tuned for more information!
Posted by Unknown at 2:56 PM No comments: