What We Learned About Zoning 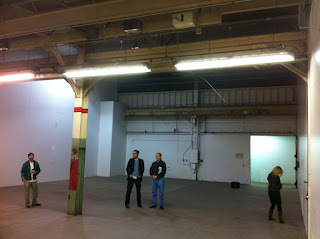 Ah, this has been an long process of learning many new things. One thing we learned as of late is that of city zoning regulations. After talking with the city and our architect, we discovered that the space at Como and 280 could not pass the barrage of city regulations. It seemed we were more excited about the structure of the space than little things like sprinkler systems, bathrooms, and exit doors. We looked into renovating the space, but the costs quickly added up and we deemed it to be too expensive.
From this we realized that we needed to find a new location, and that we did!
The new location is actually in the same building that we looked at in the very beginning. This space is in the Thorp BOHM building at 1620 Central Ave and it is ready to go! Some of you may have seen pictures of similar spaces in this building previously on this blog. This particular space is not shown on that blog post, but is now being considered the primary choice for us to build in. At 2,660 square feet, we can operate out gym under much more lenient restrictions from the city. This means that all of our money can go into the gym itself, and not into infrastructure. This space also offers the best steel structure to build off of. It is very similar in construction to the 2554 Como Ave space, minus the first lower wing at the entrance, but adds huge bridge crane rails that can support any structure that we could imagine.
We are working with an architect, who is also a climber, to help us through the compliance process with the city. We may not open in January, but we are working hard to be waist deep in building materials by then! For those of you who are interested in helping during the build out, the time is coming, and we will let you know as soon as we are ready!
Posted by Unknown at 1:44 PM